The axolotl, a species of salamander found in Mexico. Photo: Wikimedia Commons

Amphibian species were most likely to suffer extinction among all life forms, a recent study has found ahead of a key event on biodiversity begins this weekend.

Amphibians were most likely to get extirpated due to agriculture, hunting and trapping, logging, pollution, invasive species and climate change, the researchers found. They were followed by mammals and birds.

The researchers used information from the International Union for Conservation of Nature (IUCN) Red List on threats to 23,271 species representing all terrestrial amphibians, birds and mammals. They used this to generate global maps of the six major threats to these groups.

Marseille, France will host the IUCN World Conservation Congress from September 3-11, 2021. The event is organised every four years and is one of the biggest of its kind for biodiversity.

The researchers found that agriculture posed the greatest threat for amphibians, with the highest probability of impact in 44 per cent of the mapped area. 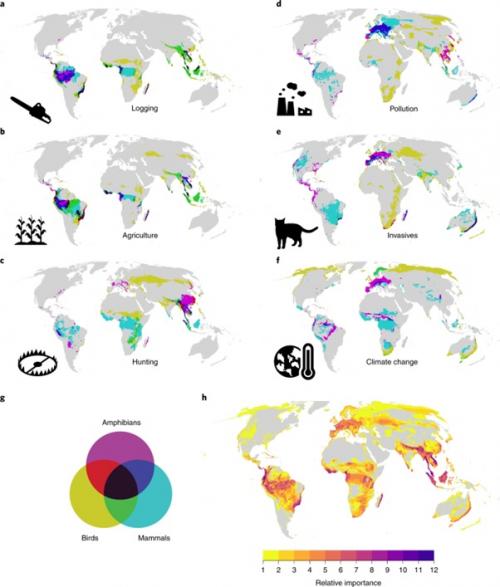 Some areas were threatened by logging, hunting and trapping, agriculture, invasive species and climate change. These had greater than 50 per cent risk for amphibian, mammals and bird species.

The islands of Sumatra and Borneo and Madagascar exhibited high probabilities of impact across all threats and life forms. Europe was impacted by a combination of agriculture, invasive species and pollution, making it a region with high impact probabilities.

The polar region, the east coast of Australia and South Africa showed the highest impact probabilities for climate change, especially with respect to birds.

The study showed that agriculture and logging were pervasive in the tropics and that hunting and trapping was the most geographically widespread threat to mammals and birds.

Agriculture had the highest average impact probability, followed by hunting and trapping and then by logging.

The study was published in Nature Ecology and Evolution, August 30, 2021.