Anita Naik, a farmer living near Similipal National Park, has become an entrepreneur after turning to maize instead of paddy

Over 70 per cent of rural women in India are engaged in agriculture. Women carry out a large portion of the farm work as cultivators and agricultural labourers. Yet, in most instances, they are not even counted and recognised as farmers.

Millions of rural Indian women also shoulder the domestic work burden, a job that is undervalued and unrecognised economically. The contributions of these women, often overlooked, play a pivotal role in creating food security that sustains rural communities.

Farmer Anita Naik is one such woman in rural India. On the International Day of Rural Women (October 15), we should recognize the contributions of millions of rural farmers like her.

A day in her life

Farmer Anita Naik hails from the village of Badbil in the Mayurbhanj district of Odisha. The village is surrounded by small hills and the lush greenery of the Similipal National Park.

“The day is short and so much still needs to be done at home and in the field,” Anita says after toiling from early morning till evening. Anita, 41 years old, belongs to a tribal community that has long lived off the land through farming and rearing livestock.

Smallholder farmers like her have been growing rice, maize and vegetables in traditional ways (often labour-intensive with limited yield) to ensure food for their families.

Anita was married at a young age. She has a son and a daughter. Her husband and her son are daily wage labourers.

But the uncertainty around their jobs and her husband’s chronic ill-health means that she shoulders most of the responsibilities of her family’s well-being. Short and lean, with a stoic expression, Anita’s age belies the experience that a life of endless struggle brings.

Anita begins her day just before dawn, a little past 4 am, with household chores. After letting out the livestock animals (goats, cattle, chicken and sheep) for the day, she sweeps the insides of the house, the courtyard and the animal shed.

She then lights the wood stove to prepare tea for herself and her family, who are slowly waking up to the sound of the crowing rooster.

Anita feeds the animals, helped by her young daughter and then cleans up the dirty dishes from last evening., She starts preparing for the morning and afternoon meals around 6.30-7 am.

During the lean months, when farm work is not pressing, Anita works as a daily wage earner at a fly ash bricks factory about two kilometers away from her house.

She says the extra income helps her cover costs during emergencies and that she finds it difficult to “stay idle if I am not working on the farm.”

However, the novel coronavirus disease (COVID-19) restrictions since last year have affected this source of income for the family.

Once her morning household chores are over, Anita works on her small farmland adjoining her house, where she cultivates maize and grows vegetables primarily for household consumption. 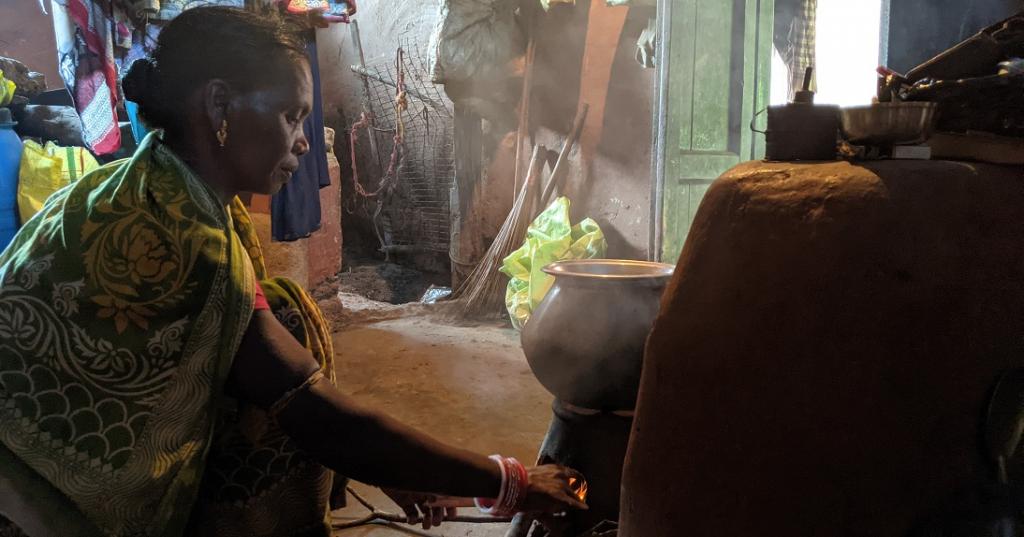 Anita started cultivating maize only after joining a self-help group (SHG) in 2014 that helped her and other women cultivate hybrid maize for commercial production on leased land.

They were supported by the Cereal Systems Initiative for South Asia project’s (CSISA) maize intensification programme.

Every year from June to October, apart from cultivating maize her own land, Anita works on this leased farmland, from the sowing of the crop to its harvesting and even its marketing with other members.

A little further away from her house, Anita has another small piece of land where she grows paddy with the help of her husband and son.

After checking in on her maize crop on the leased land, Anita works in the paddy fields the rest of the day.

During paddy cultivation, a woman’s primary role is to remove the weeds. Anita tends to her land diligently, intent on removing the weeds that keep springing up again and again in the monsoon season.

“It is back-breaking work, but I have to do it myself as I cannot afford to employ a labourer,” laments Anita.

Anita finally takes a break around 1 pm for lunch, after some hours of work in the paddy field. On some days, particularly in summers, when exhaustion takes over, she takes a short nap before getting back to removing weeds in the paddy fields.

After hours spent bending to clear the weeds, she finally heads home around 4 pm. At home, she first takes the animals back into their shed.

Close to around 6 pm, she starts preparing for dinner. After dinner, she clears the kitchen and the woodstove before calling it a night and going to bed around 8-9 pm.

Tomorrow is a new day, but chores at home and the work in the fields continue for Anita and farmers like her who selflessly go about their life.

Traditionally, farmers in and around Anita’s village cultivated paddy in their small uplands for personal consumption only, leaving the land fallow for the rest of the year.

Growing rice is quite taxing as paddy is a labour-intensive crop involving sowing, irrigating, weeding and harvesting. Yields can vary and are often low due to limited resources, lack of awareness and appropriate machinery.

The aim was for them to make maximum use of the land all year-round and to move beyond personal consumption towards commercial production.

During the initial phase, maize stood out as an alternative crop with a high level of acceptance, particularly among women farmers.

CSISA started working in four districts — Mayurbhanj, Nuapada, Bolangir, and Keonjhar – together with various state, private, and civil society actors to help catalyse the adoption of maize production in the region. At present, maize cultivation has been adopted by 7,600 farmers, of which 28 per cent are women farmers in these four districts.

Today, women like Anita Naik have established themselves as successful maize farmers and entrepreneurs. In 2020, despite COVID19 disruptions, Anita’s SHG made a profit of Rs 66,000 from green cobs and Rs 45,000 from dry grain selling.

Many of these women were also the only breadwinners after the COVID19 crisis hit the employment of male members in the family. As more and more farmers adopt maize cultivation with better agronomic practices, their stories of success are just beginning to unfold.