Residents of Manchal village in Telangana’s Ranga Reddy district levelled their undulating lands and used the stones to form bunds around the field (Photograph: Shagun Kapil)

This 1 hectare farmland has been in the family for generations. But it was only in 2010 that I could start farming in the entire area,” says G Narsimha of Manchal village in Telangana’s Ranga Reddy district. The village, which was part of Andhra Pradesh before the state’s bifurcation in 2014, has an undulated topography comprising of elevated uplands with steep slopes, dissected by deep and narrow gullies. This makes ploughing and sowing seeds difficult. An uneven land also requires more water and is at a higher risk of soil erosion. 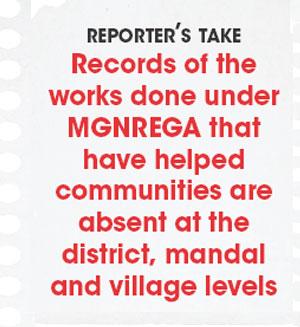 So, when MGNREGA was introduced in 2006, the gram panchayat decided to carry out levelling of farmlands that are smaller than 2 hectares (ha). The idea was to benefit the small farmers. “The fields were levelled by removing excess stones, which were later used to create bunds around the field,” says S Swamy, technical assistant under MGNREGA for Manchal mandal.

“My farm income has jumped from just Rs 30,000 in 2006 to Rs 1.2 lakh now,” says Narsimha, who used to drive an auto-rickshaw in Hyderabad, 60 km from the village. His wife Swaroopa says farming in the village remains rainfed. “Before 2010, we would grow paddy only in the years when we had good showers. Otherwise, we would skip farming.

Now, we grow spinach, tomato, mint, pulses, and coconut,” she adds. There are also 12 teak trees on the farm’s boundary that were planted under MGNREGA for improving water retention of the soil. Farmers receive Rs 5 per teak tree per month for the first three years for the maintenance of the trees. They can apply for fresh bunding after two years if it gets damaged.

The panchayat claims that levelling work has been carried out in 101 farmlands in the first two years of the scheme. Till date, 400 farmers have benefitted from it. As many as 35 individual farm ponds have also been constructed under MGNREGA since 2009-10.

In 2011, the village undertook its first major community project when it desilted an existing lake. The silt was distributed among farmers to be used as fertilisers. In the last two years, the village has received good rainfall and the area under cultivation has increased sharply from 393 ha in 2019 to 899 ha in 2020.