As thousands of farmers inched closer to the national capital November 27, 2020, the farmer groups conglomeration ‘Samyukt Kisan Morcha’ appealed to Prime Minister Narendra Modi and Delhi Police to stop the “confrontationist attitude” and ensure farmers have a free and safe passage into Delhi.

The farmers — who have been repeatedly subjected to lathi-charge, tear gas and water cannons by the police — started the ‘Delhi Chalo’ agitation against the central government’s new farm laws and proposed Electricity Bill, 2020 on November 25.

The national president of Swaraj India, Yogendra Yadav tweeted that protesting farmers had been allowed to enter the national capital and given permission to protest at Nirankari Samagam Ground in Burari.

The national convenor of Rashtriya Kisan Mazdoor Sangathan and All India Kisan Sangharsh Coordination Committee November 27 tweeted “arrangements had been made for farmers to stay in the national capital”.

The letter to the PM stated:

The nation, and the Government of India in particular have reached a crucial juncture when they have to ensure that farmers should not undergo this, and to ensure that no untoward incident occurs in an unfortunate stand-off between our annadatas and the government. It is because our voices were not heard and taken into account when framing the ordinances or passing them as Acts in the Parliament that has brought about this situation. The representations given to you multiple times in mounting agitations by farmers and their organisations across India are yet to receive replies from you.

The Delhi Police have reportedly sought the government’s permission to use the city’s nine stadiums as temporary jails to house protesting farmers from Punjab and Haryana. Farmers, meanwhile, have requested space, for instance the Ramlila Maidan, where they could gather and hold talks with the Centre. 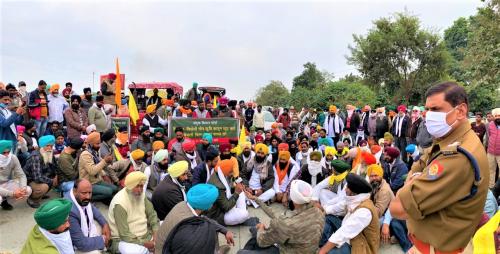 Some farmers had reached Tikri border near the Delhi-Bahadurgarh highway and Singhu border 26-27 November. The Delhi Police used coercive measures, including lathi-charge, water cannons and tear gas shells, to disperse them. Many others reached adjoining areas like Panipat and Sirsa by Friday.

Heavy security, meanwhile, remained deployed at the Delhi-Haryana border areas. To stop farmers from entering the city, Delhi Police used sand-laden trucks as barricades and barbed wire for fencing at the Singhu border.

“They are doing this in the cruel winters of north India. We have been marching nonetheless, and thankfully without any untoward incident so far,” the Samyukt Kisan Morcha said.

It requested the PM and the Delhi police commissioner to take necessary action in view of the “emergent and urgent situation” that has emerged.

It asked the government and police to ensure that the farmers have a free and safe passage into Delhi “without creating a situation where any untoward incident is justified later on as having been necessitated, which will cause a completely avoidable break away from the very peaceful manner that we have adopted so far.”

Farmers from Karnataka, Maharashtra and Madhya Pradesh were detained at the Rajasthan-Uttar Pradesh border at Semar Ka Pura by the UP police Wednesday night. Other groups that were stopped in Agra haven’t been able to march forward so far.

Meanwhile, several farmers groups not marching towards Delhi have been protesting in their villages through ‘Kisan Sangharsh Samitis’.