Shallow groundwater storage as of January 11, 2021, as measured by the Gravity Recovery and Climate Experiment Follow On (GRACE-FO) satellites. Blue areas have more water than usual, and orange and red areas have less. Image: Lauren Dauphin/NASA Earth Observatory

Most of Turkey has been under intense drought from the beginning of the year, after consecutive seasons of little or no rainfall, the Nasa Earth Observatory reported.

This has put agriculture in the Mediterranean country under threat. Istanbul, its most populous city, can run out of water in months, officials said.

In 2018, the South African city Cape Town witnessed similarly severe droughts that threatened to cut off water supply for the enitre town. Water reservoirs that supply to 3.7 million people had dipped to below 20 per cent.

Last year was the driest year for Turkey in five years, with every province receiving below-average rainfall every month since July. From October to December, the country witnessed rainfall 48 per cent lower than the average for 1981-2010.

This was followed by a difficult 2019 when it hardly rained in the summer and autumn months. This had already depleted the country’s aquifers substantially.

Now, several of Istanbul’s water reserves have the lowest volumes recorded in the last 15 years. As of January 13, 2021, storage rates from at least seven reservoirs around Istanbul measured just below 25 per cent.

“In the Konya Plain, farmers experienced about 38 per cent less precipitation from July to December 2020 than the same time in 2019,” said the NASA report.

It takes a lot of time for aquifers to recover from droughts as in the absence of rain, they rely of surface moisture to percolate though the soil and rocks. Dry spells can cause this layer of moisture, known as root zone moisture, to also vanish.

Root zone moisture is also vital for agriculture as it is the most easily available source of water for plants. 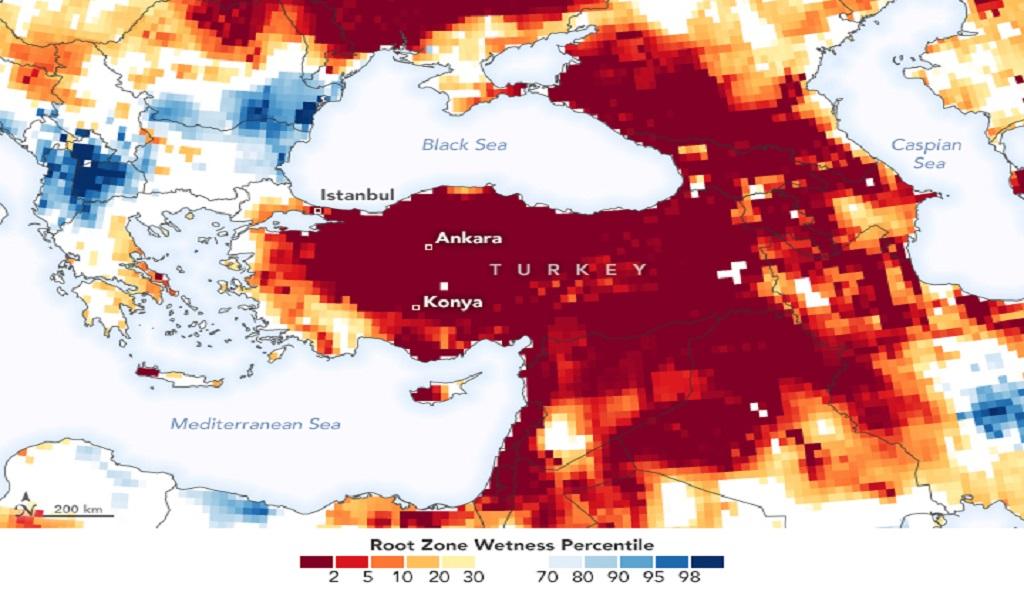 Estimates of soil moisture in the root zone, the top 39 inches of soil, as of January 11, 2021. Image: Lauren Dauphin/NASA Earth Observatory

The Konya Plain, which saw about 38 per cent less precipitation from July to December 2020 than the same period in 2019, is among the lowest ‘root zone wetness’ areas. Grain harvests in this region have been severely hit and farmers are constantly living in uncertainty about the future of crop production.

The second half of January 2021 might see a more rainfall “but it would take extended, persistent rain to raise water levels to comfortable volumes,” the NASA report said.