Bamboo, the plant with a thousand applications, has its origin either in the farms or forests. It is important to distinguish between farm and forest bamboo as each is governed by different sets of rules and regulations.

Till 2018, both types of bamboo were considered as ‘forest’ items. This, therefore, posed restrictions on bamboo’s free movement and trade.

However, the lack of organised markets for farm bamboo remains a problem. Those cultivating bamboo are not very clear about where it is to be sold or what the prevailing market price is. Additionally, there are no set standards for the grading and classification of bamboo.

Hence, farmers are reluctant to take up new bamboo plantations or scale up existing ones.

It is not that there is no demand for bamboo. In fact, there is plenty of demand for it in various applications such as furniture, housing, construction and handicrafts to name a few.

The demand is increasing exponentially. It will continue to grow due to increasing pressure on timber and pressing issues such as deforestation, depletion of natural resources, global warming, etc.

The real problem lies in the lack of established channels between buyers and sellers. Somehow, the bamboo ecosystem has not developed as the commodity is very new for all stakeholders despite being centuries-old. The blame for the same can neither be put on the government nor on any other player. But as there is a problem, there also has to be a solution.

It suggests identifying inputs that are potentially the most productive and making them the priority. In the case of the bamboo sector, the issue of the unorganised bamboo market also falls within the priority list of issues which, when solved, has the potential to address 80 per cent of the problems prevailing in the sector.

The government also recognises the role of developing such organised bamboo markets as the agenda item 10.6 of the operational guidelines for the restructured National Bamboo Mission. The item reiterates the ‘Promotion and Development of Infrastructure for Bamboo Market’.

The government focus here is majorly on bamboo mandis or wholesale markets that sell truckloads of the commodity. But there is also a need to create and promote weekly bamboo markets / haats at tehsil / taluka levels for purchasing small quantities of bamboo (say up to 100 poles).

These local-level markets would primarily be for procuring bamboo from smallholder farmers. They, in turn, can sell it to bigger traders, markets or other supply chains.

The underlying assumption here is that farmers growing bamboo in bigger areas (say more than five acres) or those cultivating truckloads of bamboo, are in a position to find markets for their produce on their own.

These may appear to be a few clumps of bamboo. But in the absence of any designated market, there is no incentive for these smallholder farmers to tend these clumps carefully or manage them regularly for better productivity.

While roaming the fields near Pench National Park in Maharashtra, I came across several farmers for whom these bamboo clumps had become a menace. They argued that monkeys regularly came and hid in these clumps and also destroyed their crops.

To get rid of this problem, some farmers had also tried to eradicate the clumps by burning them. But then, I also came across a local entrepreneur in the same region who realised this was as an opportunity. The entrepreneur started purchasing bamboo from the same farmers.

Now, it has become a win-win situation for both, the farmers and entrepreneur, as both are the reaping the benefits from the same bamboo which used to be a burden earlier.

There is a need to promote thousands of such small entrepreneurs who would act as small aggregators for farm bamboo. The local entrepreneur may be trained in proper sorting, grading, stocking and treatment of bamboo.

The establishment of such small-scale market facilitation centers would not only benefit farmers and the local entrepreneur, but also encourage more farmers to go for bamboo cultivation and that too, on a bigger scale.

If a farmer is able to locate a bamboo market close to his area of operation, it would automatically trigger his / her lost interest and establish the much- needed trust between the producer and produce.

This also has a number of other applications in achieving government initiatives such as the Atmanirbhar Bharat Abhiyan, Vocal for Local Campaign and the doubling of farmers’ income.

This price may be decided by studying the prevailing market rates and by consulting with the associated forest office. At the same time, the operator should be given autonomy and flexibility to decide the rates according to the season and market demand.

One such market facilitation centre has already been developed on a pilot basis by the Maharashtra Bamboo Promotion Foundation in eastern Maharashtra for the purchase and sale of farm bamboo. 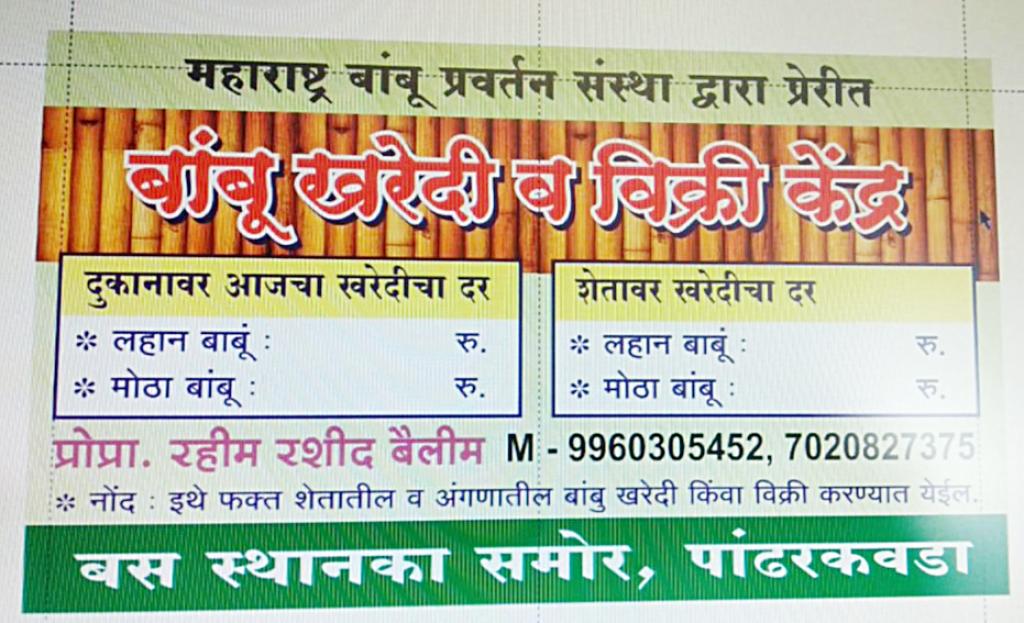 The promotion and development of organised farm bamboo markets is a low hanging fruit, waiting to be tapped. This initiative, if implemented and executed well, has the potential to develop a chain reaction.

The gains by one stakeholder could trigger those of players further in the supply chain. Ultimately, it would bridge the loose ends prevalent in the bamboo ecosystem, thereby developing better forward and backward linkages.

Abhishek Gawande is Special Project Associate, Maharashtra Bamboo Promotion Foundation. Views expressed are the author’s own and don’t necessarily reflect those of Down To Earth